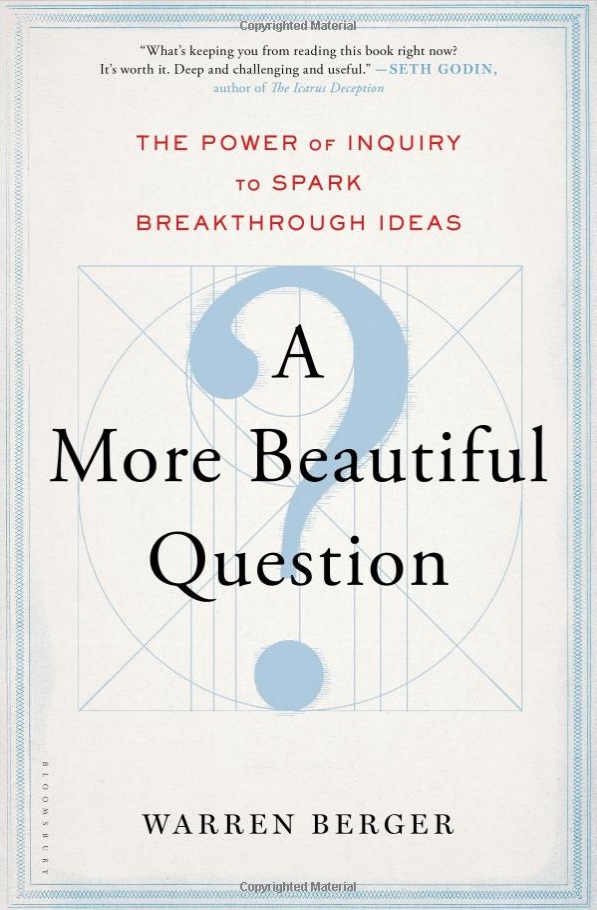 I’ve been a devotee of the Socratic method for many years and have found it especially useful in mentoring founders. So I was excited to find what appeared to be an entire book about the power of questioning: A More Beautiful Question by Warren Berger. The good news is that the first 75 pages or so do focus on the power of the question and why it’s so important in our time of accelerating technological change and complexity. Unfortunately the rest of the book degenerates into the typical business book pastiche of a zillion quotes from people you’ve never heard of and endless variations on the author’s main themes. What would have made a great long form article on Medium, The New Yorker or Vanity Fair has gotten inflated into an entire book. That being said, I still recommend the book, especially, for educators, as Warren Berger focuses a great deal of his attention on what’s wrong with today’s (and yesterday’s) education system: a focus on memorizing and regurgitating facts as opposed to learning how to ask important questions. I found myself underlining sentences multiple times per page – there are great quotes and stories about the power of the question. (Do yourself a favor and buy the paperback or the Kindle edition and save yourself some money.)

One story which I particularly like, though it may well be apocryphal, is the story about Einstein. He said that if he had an hour to solve a problem and his life depended on it, he’d spend the first fifty-five minutes making sure he was answering the right question.

Clayton Christiansen observes that questioning is seen as “inefficient” by many business leaders, who are so anxious to act, to do, that they often feel like they don’t have the time to question just what it is they are doing. I’ve found this especially true of founders with their bias for action and strong sense of urgency.

Berger offers a powerful definition of a beautiful question:

An ambitious, yet actionable question that can begin to shift the way we perceive or think about something – and that might serve as a catalyst to bring about change.

Another important insight that resonated especially well with me was that “questioning often has an inverse relationship to expertise – such that within their own subject areas, experts are apt to become poor questioners. Frank Lloyd Wright put it well when he remarked that an expert is someone who has “stopped thinking because he knows.”

Most people are reluctant to ask question for two reasons: one, that they may appear stupid, or more precisely ignorant;  and two, that they may appear to be questioning authority, which might endanger their career prospects. When I unexpectedly found myself in the personal software industry in 1980 with only a light hobbyist knowledge of computing and surrounded by MIT educated software engineers, I quickly learned that if I didn’t ask questions I would never learn what I needed to know. And in fact no one considered me ignorant for asking questions and sometimes my non-expert questions even catalyzed discussions amongst the expert engineers.

My most powerful takeaway from Berger’s book, the insight that is most relevant to mentoring founders, is that it is not the questions I ask the founders that are so important, but that I help them learn the power of asking questions themselves, of their colleagues, the world around them and themselves. As Leon Bernstein, president of Bard College, is quoted on the power of questioning: “… the ability to question not only other people’s views, but one’s own assumptions.”

As Jay Ito, head of MIT’s Media Lab said, “you don’t learn unless you question.” And as I’ve posted before, startups are learning machines – experimental labs where the founder forms a hypothesis, designs an experiments to gather data to test the hypothesis, and then modifies their thinking based on the results of their experiment. Iterate until true.

I could go on quoting salient sections of Berger’s book and quotes from the many people he has spoken to or read about, instead I recommend you buy the book and make these discoveries for yourself. And perhaps, unlike me, you may even find the latter chapters as valuable as the first.