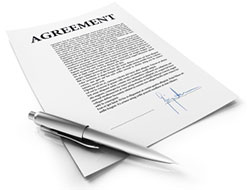 I recently had a mentee who signed an agreement that included a non-compete clause – not that unusual – but this one had no term limit on it! If this agreement stood up in court in theory it could prevent him from starting or joining a company in any way competitive with the startup whose agreement he signed for the balance of his career. Lucky for him the agreement was defective in several ways. But it got me thinking about the agreements investors – mainly VCs – demand that all founders AND all employees sign as a condition of the investment.

These agreements are typically titled Confidential Non-Disclosure Agreements, and if that’s all they were I wouldn’t be too concerned. NDAs just need to be clear that if the information considered confidential becomes public, or if the employee learned it from another source or various other exceptions, they are not liable. I’ve signed dozens of these agreements myself, not only with every VC-backed startup I’ve founded, but with all the large companies I’ve partnered with, like IBM and Apple.

But what founders have to look out for is that often there are one or two other clauses slipped into NDAs that could cause them trouble down the line: non-competes,
non-solicitation, non-disparagement, and agreements to arbitration.

Let’s take these one at at time.

Personally I’m dead set against these agreements and for good reason, they not only can hamstring founders but they also are one of several reasons that Silicon Valley is such a successful entrepreneurial community and Boston/Cambridge is in second or third place. Non-competes have been ruled not enforceable in California. As a result entrepreneurs who leave one company to start another don’t have to worry about being sued by their former employer, nor do their investors. This ability to spin out of a company and start a new one is a little recognized but important factor in why Silicon Valley keeps spawning startups. But in Massachusetts the big tech companies have a stranglehold on the legislature and every attempt to defeat the non-compete has failed. And until the legislature and governor realize that non-competes are hampering innovation in Massachusetts we will have to deal with them. So with my typical disclaimer: I am not now, nor have ever been a lawyer, here are two things to watch out for. One, make sure that what the company actually does is spelled out very clearly completely and as narrowly as possible. You need to know exactly what you are forbidden to compete with should you leave the company. Secondly, make sure the term is one-year or less. That’s pretty standard, but shorter is always better. Finally, if you can do it, try to get the non-compete to be null and void if the company is acquired. Big companies actually have the resources to sue founders that startups lack.

Non-solicitation means that you agree not to hire away any employee for your startup or another company you join. This sounds reasonable to me as it can really hurt a startup if you leave and take some key employees with you. So I’d just advise that you make sure this is also term limited, one-year or less.

This clause, which in plain English means you won’t say anything bad about the company, its products, investors or employees, is usually found in termination agreements – when you are fired or leave on bad terms with the company. My advice here is to make sure that this is mutual – make sure the company is forbidden from saying anything negative about you. Otherwise you run the risk of having a problem finding a new job or getting investors for your next startup. I hope you are never in the position to have to deal with this one, but if you do, be wary. Best path would be to strike it out if possible. Otherwise you might find yourself sued due to a blog or Facebook post that the company doesn’t like.

This clause means that you agree that any issue you have with the company will be decided by an arbiter or arbitration panel. This may seem harmless on the face of it, but what it really means is you give up your right to sue the company. Again, I hope you never are in the position of wanting to or needing to sue your company, but if you are you should be able to. Try to get this clause stricken out if you can.

NDAs, non-competes etc. virtually always are presented when you either first join a startup or when you first receive VC money. Like rock bands that are so excited to get a recording contract that they don’t read the fine print – or often any of the print – joining a hot startup or getting your first round of VC money is very exciting. Also you are probably wary of “rocking the boat” – getting a reputation as difficult to deal with, or worse case losing the job or the investment. But actually the opposite is the case. Experienced founders and investors will respect an entrepreneur who pushes back and doesn’t just sign whatever is put in front of them. Also, you have your maximum leverage when joining a company or receiving an investment – once you join or take the investment your leverage to get agreements like NDAs and non-competes modified goes down to approach zero. This is also true of negotiating your compensation, vesting schedule or almost everything else affecting your career. Don’t let your excitement about joining a hot startup or landing a big investor for your company blind you to the risks of signing agreements that could come back to bite you should you ever leave the company.

The best advice I can give any founder is get your own personal attorney. I know founders hate spending money on legal services, but consider the expense like an insurance policy. If you own your house or condo you have insurance against fire or other rare but catastrophic events, right? If you have a good attorney, meaning one with a lot of experience dealing with startups and VCs, he or she should not have to spend a lot of time reviewing any agreement you sign and flagging problematic clauses that either need to be modified or deleted.

I’ve seen so many entrepreneurs lately who have run into problems because they didn’t have any legal advice when signing founder’s agreements or the like and now are in the unfortunate position of having to spend 10X or more on legal fees to extricate themselves from the mess they are in. The old saying “An ounce of prevention is worth a pound of cure”couldn’t be more true when it comes to startups and signing legal agreements.