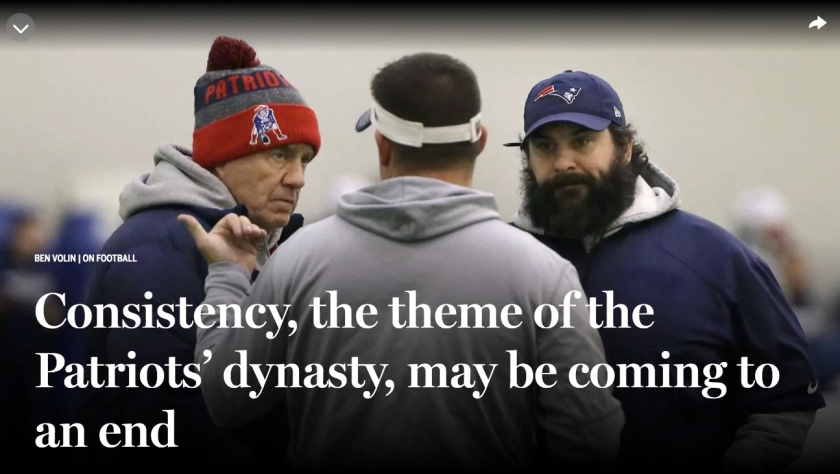 This morning I was reading a column by my favorite football writer of all time in The Boston Globe, Ben Volin, Consistency, the theme of the Patriots dynasty, may be coming to an end. He was extolling the benefits of The Patriots having the same coaches and quarterback for many years.

The defining hallmark of the Patriots’ dynasty has been their consistency and continuity.

Bill Belichick has been the coach for 18 years. Tom Brady the quarterback for 17. Josh McDaniels and Nick Caserio have been with the organization since 2001, Matt Patricia since 2004.

Of considerably more importance to tech company founders and everyone using microprocessor-based technology was the article on the two major bugs found in Intel’s chips: Intel Faces Scrutiny as Questions Swirl Over Chip Security by Don Clark in The New York Times. (Yep, I do read the sports page before the business page.)

We created a microprocessor monoculture,” said Bryan Cantrill, chief technology officer at Joyent, a cloud service owned by Samsung. “There are dangers associated with that.

There are also downsides to creating a company monoculture. I remember several years ago an analyst pointed out that the reason Microsoft no longer was the technology leader, despite record sales revenue and profit under CEO Steve Ballmer, that they were a monoculture and that meant they never had a diversity of opinion, which is very important as I pointed out in yesterday’s post, Lessons to be learned from history of Silicon Valley.

Stay curious about what other people think. Instead of working toward “culture fit,” which can be a lead to hiring like-minded people, build teams to “bring together different viewpoints.

While the term monoculture is used in agriculture, it can hold true in corporate culture or products like computer chips.

Since all plants in a monoculture are genetically similar, if a disease strikes to which they have no resistance, it can destroy entire populations of crops.

Microsoft completely missed two of the biggest tends in technology of the past ten years: cloud computing and mobile devices. Under their new CEO, Satya Nadella, who replaced Ballmer they have done a great job of scrambling to catch up in cloud computing, but remain an also-ran in mobile. Nadella has made changing Microsoft’s culture a top priority.  In fact it’s a theme of his book Hit Refresh: The quest to rediscover Microsoft’s soul and imagine a better future for everyone, 2017.

So while there are certainly benefits to any business of having consistency and continuity as Oscar Wilde said, Consistency is the last refuge of the unimaginative. And Ralph Waldo Emerson is even more damning:

A foolish consistency is the hobgoblin of little minds, adored by little statesmen and philosophers and divines. With consistency a great soul has simply nothing to do. He may as well concern himself with his shadow on the wall. Speak what you think now in hard words, and to-morrow speak what to-morrow thinks in hard words again, though it contradict every thing you said to-day. — ‘Ah, so you shall be sure to be misunderstood.’ — Is it so bad, then, to be misunderstood? Pythagoras was misunderstood, and Socrates, and Jesus, and Luther, and Copernicus, and Galileo, and Newton, and every pure and wise spirit that ever took flesh. To be great is to be misunderstood.

So if you are a founder and/or CEO make sure you encourage diversity of thought and avoid creating a culture of “yes men” or an echo chamber of ideas. You don’t want to create a monoculture, subject to being wiped out by a new business trend, as so often happens, or to waste the creativity and originality of your team.

Encourage diversity: in hiring, in discussions, problem solving, and in your culture. The best and most successful cultures, such as Xerox Parc and Intel, strongly encourage disagreements and even strenuous arguments, in service of coming up with the best idea or solution to a problem. But do remember that if you disagree strongly, make sure you are clear that it is the person’s idea or suggestion you disagree with not the person. Ad hominem arguments are to be avoided at all costs.

One thought on “The dangers of a monoculture”