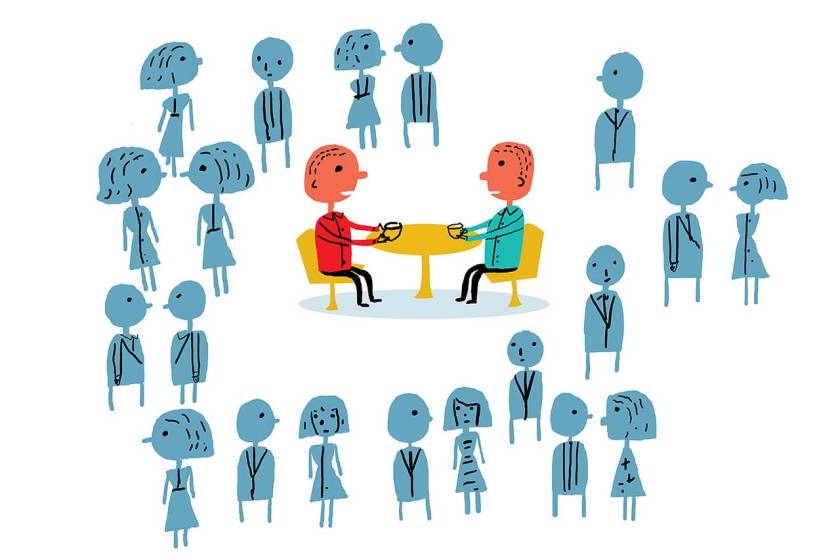 I first encountered the word network in conjunction with TV. There I found the CBS Television Network, the NBC Television Network, and the ABC Television network. Later joined by other 3-letter networks, like Fox. I had a very dim idea what was really meant by the term network as applied to TV stations, but it didn’t really matter it had no effect on my hours of TV viewing. Then upon entering the personal computer industry the work network morphed. It no longer had to do with TV, but with the very arcane process of connecting multiple computers so that they could communicate amongst themselves. Bob Metcalfe‘s invention of Ethernet at Xerox Parc was so important that not only did he go on to found a networking company, 3Com, but an entire industry.

But as the entrepreneurial fervor has grown ever more frenetic over the past few years the word network has become a verb – meaning connecting with people you did not know in order to either find a job (career networking) or find an investor or key hire (entrepreneurial networking.)

Either way as an introvert who has never been comfortable with either flavor of networking I was captivated by The Wall Street Journal article Networking for Actual Human Beings by David Burkus.  The conclusion of the article is found in the sub-title to the article: The research is clear: People don’t mix at mixers, and don’t feel good about trying. But there are better ways to make meaningful connections. Interesting how newspaper are now providing what are called abstracts in academic publications.

While I thought I was alone in hating networking it appears that research has shown that most people hate networking – making connections with strangers – and dread the awkward small talk as much as I do, whether at a cocktail party or a networking event. Such events are as common now as music concerts, whether the event is aimed at climbers of the career ladder, job seekers or entrepreneurs attempting to make connections with investors, advisors or candidates to join their ventures.

David Burkus has evidence to back up his statement that not only do most people dislike networking but that it strikes many as insincere and manipulative, even slight unethical.

A 2014 study published in Administrative Science Quarterly found that just thinking about job-related networking made most people “feel dirty.”

Another study he cites was done on students in an executive MBA program. It turned out the even though the executives said they wanted to attend such events to build new business ties it turned out that they spent, on average, around half their time in conversation with people they already knew. As the study’s authors put it, people just don’t mix at mixers.

Mr. Backus has some helpful tips to garner meaningful connections without having to attend these networking functions.

I think Mr. Backus has put his finger on why networking events tend to make me queasy: … feeling that it’s all instrumental, a way for us to use other people to get ahead. Instead he recommends that we … greet all those strangers as actual human beings.

The Journal article is adapted from Mr. Burkus’s new book, Friend of a Friend: Understanding The Hidden Networks That Can Transform Your Life and Career, published by Houghton Mifflin Harcourt .