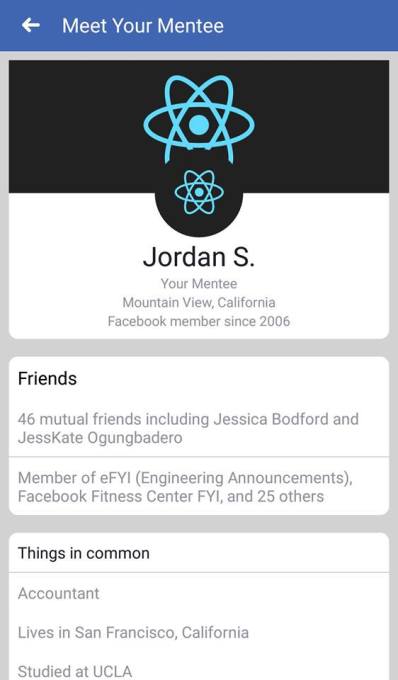 Following in the footsteps of LinkedIn, Facebook appears to ready to launch a mentorship service. Mark Zuckerberg is quoted in the Techcrunch article Facebook is testing a feature for mentorships between users | TechCrunch by Ingrid Lunden:

“Facebook has been focused on helping you connect with people you already know,” he wrote. “We’ve built AI systems to recommend ‘People You May Know’. But it might be just as important to also connect you with people you should know — mentors and people outside your circle who care about you and can provide a new source of support and inspiration.

My guess is that both Facebook and LinkedIn see their automated mentorship service as a way to enhance their career services. LinkedIn is the go-to social network for people looking to network with others in their field both to look for jobs and for career development.  Career mentoring differs markedly from mentoring of startups, as it is much more narrowly focused. This effort by Facebook is probably an effort to compete with LinkedIn rather than encroaching on the mentorship services of academic institutions like MIT or accelerators like Y-Combinator.

As I scan the Net for mentions of mentoring entrepreneurs I have yet to come across any results from LinkedIn or any other career focused social network. Facebook built its company on the backs of users’ existing social relationships, the people they already know. Now it appears Facebook will try to connect people who don’t know each other, based on mutual interests. Obviously Facebook has a lot of experience connecting people – that’s the heart of their social network – but now it is attempting to use AI to be a matchmaker between mentors and mentees, a much deeper and much different relationship than “Facebook friends.”

Whether LinkedIn or Facebook attempt to automate the mentoring of entrepreneurs remains to be seen. Obviously career mentoring is a much larger market than startup mentoring and better ties in with Facebook’s core competencies.

Just the same I will be very interested in seeing just how these experiments work out as to date no one has attempting to scale mentoring. And I’m not sure it is possible without a very strong intermediary with deep experience in building startups, be that TechStars or the MIT Venture Mentoring service. Obviously the old saw stick to your knitting no longer applies to tech companies, not only do they not only not stick to their knitting, they are busy attempting to learn tailoring and dressmaking as well!

While I’m a firm believer that automation can improve on most manual methods, mentoring requires both deep expertise and experience as well as trust. Given the issues these days with Facebook enabling third parties to access its users personal information I see trust going down, not up, for Facebook. Yet I would not underestimate Facebook’s ability to develop a completely new kind of social graph:  Workplace, an enterprise communications service for teams and larger organizations.

But mentoring has a key difference: some of the new discover people features raise questions of just how much we want to connect with those on Facebook who we don’t actually know or consider friends already. To some the service can even feel a little stalkerish.

Mentoring relationships, on the other hand, are more mutually complicit and separate to any expectation of friendship — despite the direct connections and private chats you will have with each other.

Obviously Tinder and other dating services have proven users’ willingness to connect with perfect strangers, based on what they see as compatible profiles. However, mentoring is a skill – just because someone has the same interests and experience as you does not make them a good mentor. It’s not that simple. However, I will be monitoring both LinkedIn and Facebook’s efforts,d as while I’m dubious about automating the mentoring process I am interested in virtual mentoring, which no one has yet to perfect to best of my knowledge.