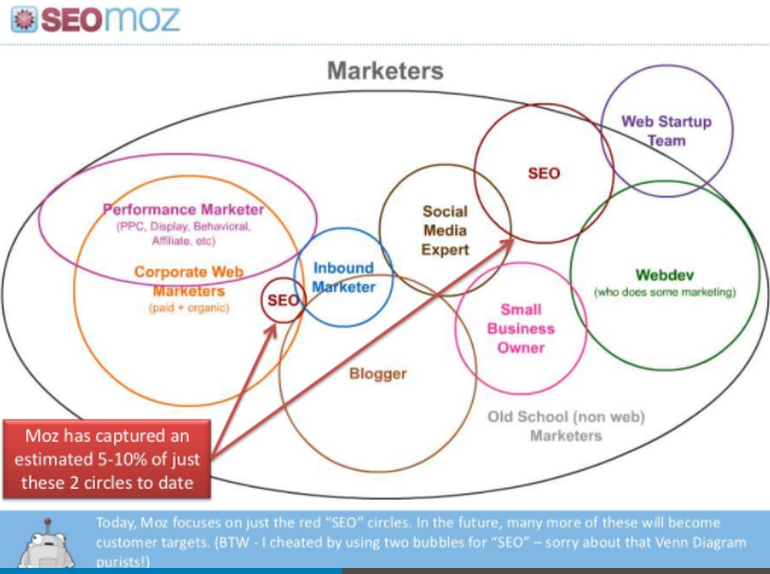 It’s not even close: the worst slide I see in pitch decks is “The Market.” What VCs want to see is not a Market slide, but Total Addressable Market (TAM). David Skok, VC at Matrix Partners, has an excellent post on his blog For Entrepreneurs that is must reading for anyone putting together a pitch deck for venture capitalists. Read this post and follow his advice and one of two things will happen: one, you will realize that your venture is not VC-fundable or you will know that you at least meet one criteria VCs are looking for and will meet their expectations with your TAM slide.

David Skok is a five-time entrepreneur whose web site has been rated #1 Website for entrepreneurs by Inc. and the #2 on the Forbes list of 100 Best Websites for Entrepreneurs. His article How to calculate your total addressable market and make a great TAM slide for investors is the best explanation of TAM I’ve seen.

David Skok has seen hundreds of pitch decks as a VC at Matrix and he too finds the TAM slide to be amongst the most poorly executed. Back when I started my first company in 1989 the concept of TAM didn’t exist, at least with East Coast VC firms. What they were looking for was The Market Opportunity: the size of the market you were going after and its rate of growth. TAM appears in the early 90’s and since then has become de rigeur. Yet I’m quite surprised that I rarely see that term used by the MIT founders in their pitch decks.

Best to start with David Skok’s definition of TAM:

A TAM slide’s role in a pitch deck is to convince investors that the company is chasing an opportunity big enough to achieve venture-scale returns with the right execution.

In the very best pitches, founders use their TAM slides to show insights into how they think about the market they are serving, the extent of their product-market-fit and their product roadmap. The goal of this piece is to help build a slide that accomplishes these goals and elevates the TAM conversation from a throwaway slide to a positive contributor to the pitch and discussions that follow.

The basic problem I see is that while most founders seem familiar with the truism that VCs are looking for a 10X return on their investment, they don’t realize that what VCs are really looking for are companies that can grow into billion dollar businesses. Many of the pitches I see are for markets that are just too small. They may become a nice sole proprietorship or boutique company, perhaps funded by friends and family or even an angel or two, but are just not of interest to VCs, or even angel groups for that matter.

From here on I’m going to summarize Skok’s points, but my goal is to convince you not just to read his post but follow his directions, otherwise his fellow VCs will have no interest in you or your deck.

The top-down analysis is by far the one that I see the most. Worse yet, I often see founders put not one, but two multi-billion dollar markets on their slides, usually backed by some market research firm. But what portion of these billion markets the venture will capture and how is often totally unclear.  An interesting note by David Skok, which I was familiar with: Uber got their TAM totally wrong! They were going after the “black car” market – limos. It wasn’t until they saw Lyft and their model of using driver’s own personal vehicles did Uber move from the private car market where they started. In short, stay way from the top down method, enticing as it is, as it relies on secondary market research which is easily found by Google.

I coach entrepreneurs to use the bottoms up method. This requires defining your customer very clearly, having strong evidence of the number of customers, explaining why these customers will buy your product, and how you will reach them. This is the type of information you gather if you do a thorough the customer discovery, customer development process proselytized by Steve Blank. Typically most startups are very engineering-driven. Engineers love building things. They don’t usually like getting out of their offices and talking to potential customers. That’s why the armchair, top-down model is so attractive to them. My advice, if you are an office-dwelling engineer, find yourself a great business partner who loves talking to prospects: the business schools are a great hunting ground for partners.

Here’s a snippet from Skok’s analysis to whet your appetite for the bottom-up model.

…in the ideal case, the company is able to carefully explain why certain categories of companies will use its solution, excluding those that aren’t likely to. For example, a mid-market provider might use employment statistics to find how many employees work at firms between 100-5,000 employees, and then adjust for blue/white collar mix if it predominately sells to white-collar firms.

The third and final methodology Skok outlines is the value-theory. The key to this is that this approach helps management teams show that they are thoughtful about what customers find valuable and are willing to pay for. Skok uses the Uber case as an example. Uber was not really in the business of disrupting the black car business – they were in the transportation business, which with Lyft’s competitive prodding they finally figured out. As proof, both companies are now busy buying up bicycle share companies, scooter companies and other transportation companies. The old saw is that if railroads had realized they weren’t in the train business but were in the freight and passenger moving business they might have realized airplanes had a lot of advantages over planes and taken over that business. I  rarely see this bottom-up analysis;  it requires a deep understanding of the venture’s value add, how they capture that value added and how that translates into pricing and revenue generation.

As I’ve written about elsewhere, what VCs are looking for are ventures that scale. Scale to VCs is a verb, it means gaining terrific leverage to grow from a mere startup to a billion dollar business, where the same amount of capital invested generates exponential, not linear growth.  When Uber left their black car business and realized every car could be an Uber car, they hit massive scale. The value-theory is best employed not as the justification for how you will get customers one through 1,000 but as your roadmap to generating greater ARPU, as the telecoms say, Average Revenue Per User. I believe this method is best used in conjunction with the company’s roadmap.

So forget the topdown method: use the bottoms up method to demonstrate how you will get customer 1 – 1000 and the value-theory for customers 1,000 to a million. A great TAM slide is more a demonstration of how the founders think than it is a blueprint for success. VCs know that the only constant in business is change, so they don’t rely on TAM slides as guaranteed predictions of the future, but as models and how the team built the model. As Skok concludes:

Demonstrating an intelligent approach to thinking about the potential future size of the business is a great way to provide proof-points that a team has what it takes to guide a company to epic scale: ambition, smarts and the ability to identify markets where there is customer willingness to pay for a better solution.

If you read to the end of his piece you’ll get a bonus: a set of TAM slides from successful early stage companies. Ironically, most of them didn’t follow Skok’s advice, but became massive successes anyway! There’s a lot to be learned not only from this article but by studying  these TAM models. Consider the TAM slide as the ante in the VC poker game, without it you will be just an onlooker.

One thought on “The worst slide in everyone’s deck”