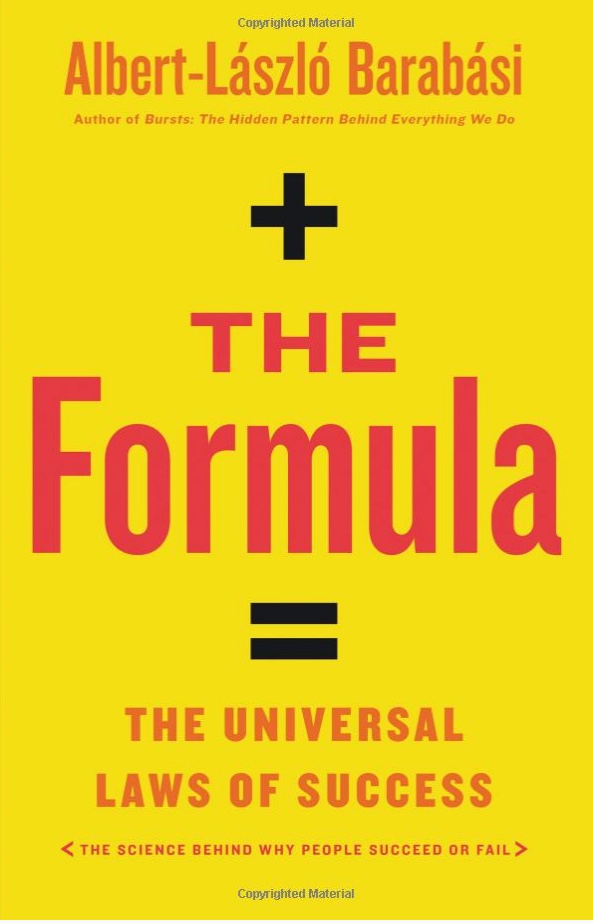 As I’ve written multiple times, the best predictor of a startup’s success is the team. And investors see the CEO as foremost. But how can they predict that the CEO will succeed? Or bring the company out of startup mode only to falter and need to be replaced?

In an upcoming book, to be published on November 6th, The Formula: The Universal Laws of Success, Albert-László Barabási, a physicist at Northeastern University, describes what makes some ideas and people succeed and others fail.

The Wall Street Journal article by Jason Zweig titled You’re a Bad Investor? That Can Be Good didn’t catch my eye, as I’m not an investor. However the sub-title certainly did: What makes people successful is different from what makes them a good performer.

Prof. Barabási is a network scientist, researching the dynamic forces that connect neurons in the brains of worms, govern which books become bestsellers, or help determine which financial assets burst into or out of favor.

In his book, set for release Nov. 6, Prof. Barabási distinguishes between performance and success.

“Performance is deeply linked to the individual,” he tells me in an interview. It follows what he calls “a bounded distribution”: the best in the world are barely separated from each other.

Many of you are familiar with Metcalfes’s Law: the effect of a telecommunications network is proportional to the square of the number of connected users of the system (n2). This law is often cited as the reason that companies like Facebook grew so quickly and have come to dominate their markets. However, Prof. Barabási credits a process he calls “preferential attachment.” Through this, networks expand explosively as new nodes link most often to those that are already most widely connected. This helps explain the power of Facebook’s Likes. However, he also writes that networks can fail When your network oversteps the boundaries of the community where you are welcome, you may find it’s no longer a proper fit. Google certainly found that out with its attempt at a social network, Google +, they overstepped their market for search and search engine-based advertising.

So what does all this have to do with founders? According to Professor Barabisi, people’s ability to create and capitalize on ideas is constant. It varies little, if at all, from young adulthood to old age.But what does vary? Persistence. It’s long been my belief, which has grown stronger over decades in the startup ecology, that persistence is the most critical success factor – not native intelligence, training or degrees from elite institutions. It’s rewarding to see a scientist agree with my intuition!

“If you’re good at something, that’s like having loaded dice,” says Prof. Barabási. “If you only roll once, you’re wasting your chances. You have to roll over and over again!”

But how can a founder take advantage of this insight?

So, if your company brings job candidates in for interviews, each member of your team should speak to them in a different order or on separate visits.

You should review potential investments in random order, lest you be influenced by whether they come toward the beginning or the end. Sleep on important investment decisions: Today’s good or bad idea may seem the opposite tomorrow, and thinking twice will improve your odds of making the right choice.

This jibes with my belief that startups need to follow the scientific method: generate a hypothesis, create an experiment to test your hypothesis, gather data, and analyze the data to judge if your hypothesis was correct or not. A startup has to run hundreds if not thousands of small experiments. As The Wall Street Journal article concludes:

Above all, never stop learning about the markets; your best idea may be yet to come.