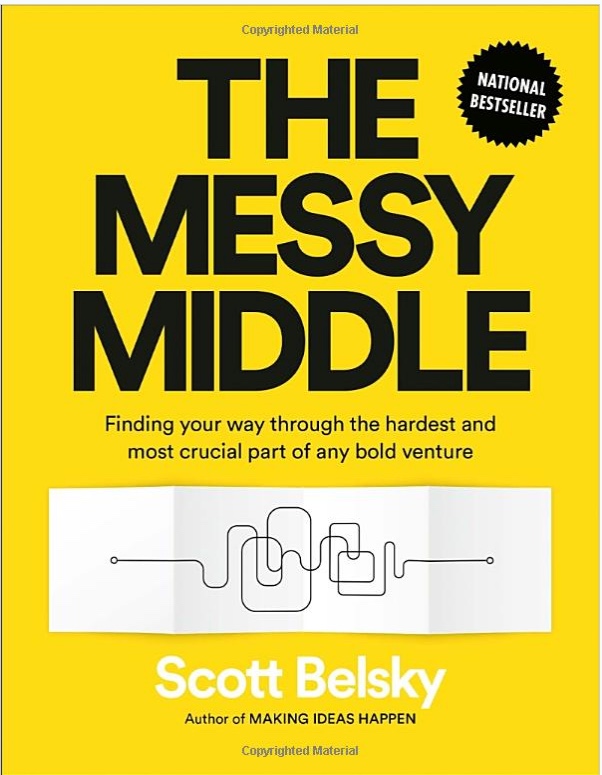 I’ve posted previously how at Amazon developers’ first step in new product development is to write a press release about the product they plan to create. But Scott Belsky in his new book The Messy Middle takes narrative well beyond the press release.

Carmine Gallo, one of my favorite business writers, writes about Belsky’s book in the Forbes article An Early Uber Investor Reveals A Creative Strategy To Build An Irresistible Brand. His key take-away from the book is that founders should build their narrative before they start developing their product.

According to Belsky, “Most entrepreneurs jump in and build a product. They’ll spend months, even years, building an MVP (minimal viable product). Right when they’re about to share it with the world, they realize it doesn’t resonate with consumers. People don’t understand why it helps them and why they should use it instead of something else.” Belsky recommends that entrepreneurs avoid this problem by starting with a story before the product is built—paint a picture of what the world will look like when the product is finished.

Belsy recommends that developers build a private web page for the product that should answer the following questions:

The narrative services not only as the roadmap to how you develop your product but how you will market it as well. All stakeholders, from investors, team, or partners are helped to visualize the future.

Being able to recite a narrative—tell a story—about a future customer and how the product will solve a real-world problem is a powerful exercise that few leaders do in the early stages of the development process. “It’s very powerful and most teams don’t spend a lot of time on it,” says Belsky.

It’s a truism that investor pitches need to tell a story, but Belsky’s concept of the narrative goes beyond that to acting as the lodestar during the entire lifecycle of the product.  I see Belsky’s approach as similar to what I recommend to founders, using the journalists who? what? why? why” where? and how? to tell their products story. But what is different about Belsky’s approach is that it helps everyone envision the future. He gives a great example, how Garrett Camp, co-founder of Uber imagined a future where where everyone could call up a private driver, something only reserved for wealthy elites at the time. He imagined it as a superpower that ordinary people would have at their fingertips, literally. The story evolved into Uber’s first tagline: Uber is everyone’s private driver. Journalists report on the present; you narrative is a report from the future!

This also ties in with how Alan Kay recommends founders develop their products which I wrote about in the blog post How to invent the future. Belsky’s put his money where his book is, he was an early investor in Uber, in addition to founding Behance, an online portfolio company for creatives that he later sold to Adobe for an estimated $150 million. Today, Belsky is Adobe’s chief product officer and a venture capital investor.

He uses as an example Garrett Camp. the cofounder of Uber. (Belsky was an early investor in the company) Before Uber was a product—or a company—Camp was working on the narrative. Camp began to imagine an experience where everyone could call up a private driver, something only reserved for wealthy elites at the time. He imagined it as a superpower that ordinary people would have at their fingertips, literally. The story evolved into Uber’s first tagline: Uber is everyone’s private driver.

To recap, while Jeff Bezos’s practice of writing a press release for a new product that has yet to even begin development acts as a guiding light, a narrative envisions the future how the product will change life for consumers. Both approaches will not only guide developers but help them communicate the nature and value of their product to all stakeholders from investors to users.