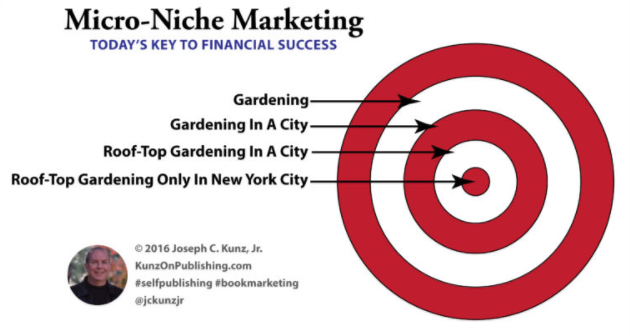 I see about two new ventures a week in my mentoring role. A significant number of those ventures every year haven’t defined a target market. This is especially true of B2C companies. When I ask them who is their customer their answer is “Everyone!” But that I preach to my mentees just the opposite. I believe in the maxim that if you are trying to be everything to everyone you will end up being nothing to anyone. Startups differ from large established companies in several ways:

So with all these disadvantages how does a startup get off the ground given its short runway? Very, very few companies can be a helicopter and take off straight up. So the advice I give is to find a niche and dominate it. What is a niche? It’s a group of customers that share a significant number of attributes. Those may be age, demographic location, life style, use of another product, or stage in life. But those attributes must be easily identifiable and the cost in time and effort to communicate with that cluster of customers can not be excessive. Best is a group that talks with each other, as word of mouth will help your product gain new customers without a high customer acquisition cost.

Ok, enough with abstract generalities. How about an example? The best example and one I usually use is Microsoft. Bill Gates and Paul Allen were top flight programmers. And beyond that they were very smart entrepreneurs. They realized that the purchasers of the early microcomputers lacked the skills and even patience and attention to detail those machines required – they had to be programmed by turning on and off a series of switches on their front panels! There was no programing language built in. Equally brilliant, Gates and Allen realized that there was an easy to learn, easy to use programming language in the public domain, BASIC, developed by John Kemeny at Dartmouth College as the ideal language for novice programmers. And in yet another smart move, their company, then called Micro-soft, contracted with the largest microcomputer company, the tiny Altair, to develop a version of BASIC for its microcomputer. Long story short, Microsoft’s target market was programmers and its product line was programming languages – the must-have tools for programmers. By targeting this niche Microsoft established its brand, learned a tremendous amount not only about its customers and their needs, but about the bundling of software and hardware, and the market dynamics of the personal computer industry. Many can say they were just lucky when IBM called on them to create the operating system for its first personal computer. But luck is a confluence of timing, ability, and preparation. Microsoft had all three. Microsoft leveraged its dominance in programming languages to a dominance in operating systems to launching Microsoft Office, which has dominated business software for decades.

Obviously not every startup will become a Microsoft no matter how closely it follows its playbook of finding a niche market that it knows well from its founders experience, can learn from, dominate and then leverage to what are called market adjacencies. These are similar markets to your niche market that don’t require a huge leap of faith nor leaps of product development and marketing costs to reach. Microsoft’s first customers were programmers and Altair. It’s next became computer manufacturers who purchased MS-DOs – which became a must-have purchase for every microcomputer company.

It doesn’t matter if you are a B2B company or a B2C company, your goal during the all important customer discovery phase is to find not just a customer, but a cluster of customers, a niche, that has an unfilled need for your product and that you can reach economically.  Finding the elusive product/market fit is much easier when your market is small and homogenous, a niche than a very large and heterogeneous market.

May founders get anxious when I preach this strategy to them. “But what if a competitor comes along who will address everyone, not the tiny market you are telling us to target, won’t they end up winning?” No. Your goal should be building barriers to entry to your niche, not worrying about the rest of the world. That’s trying to boil the ocean, as they say. Making sure you have a growth strategy and have identified adjacent markets to move into on the backs of your niche customers will also protect you against competitors.

Yes it is possible to have a product for everyone in a market. VisiCalc, the first electronic spreadsheet and its progeny, Lotus 1-2-3 and Microsoft Excel, were used by virtually every business person, though financial professionals – accountants – were the first adopters and features became targeted at that group for years. But VisiCalc was not just a generational product it was a foundational product. Spreadsheets, word processors, databases – these were the foundational products of the personal computer revolution. Followed in quick succession by a whole new market – computer games.

Find a niche. A group of customer whose problem you can solve in dramatic fashion. Where you are 10X better than existing solutions, which are often manual, clunk,y and expensive. Where customers talk to each other and word of mouth will be your best marketing tool. And stop worrying about all the potential customers you are “leaving behind” and money you are “leaving on the table.” Because they are just that prospects, not paying customers. You’ll get to them in due time – after you dominate your niche.