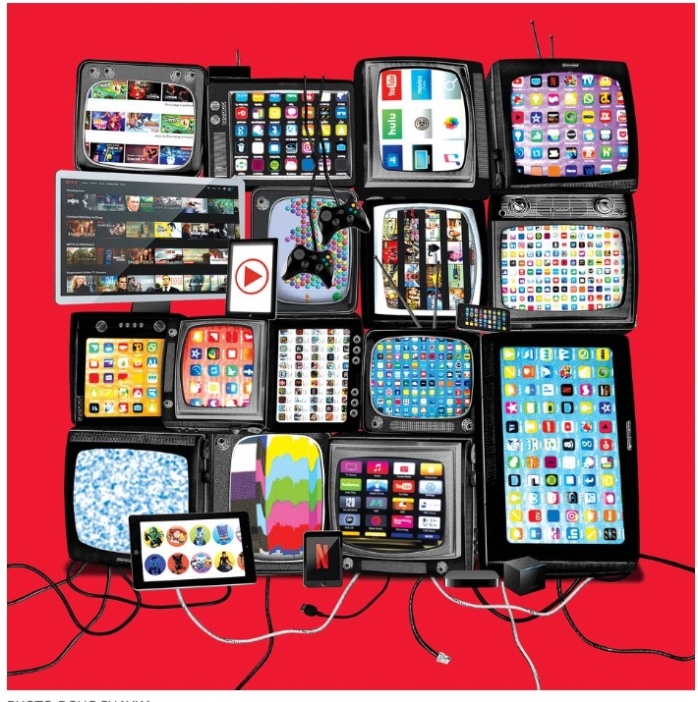 I often warn my mentees who are in the publishing, media, games, or related industries that they are in a battle for their audience’s attention. Their customers have a plethora of things to read, listen to – podcasts now in addition to music and the radio, and watch.

I am now so old that I remember when there were just 3 television channels, ABC, NBC and CBS. We got very excited when UHF (Ultra High Frequency) channels joined the three VHF (Very High Frequency) channels; though the former required a special UHF antenna and still the reception could be somewhat dodgy. UHF was clearly the minor leagues of TV, but we welcomed it any way, since their was a paucity of TV shows.

Michael Goldhaber’s The Attention Economy and the Net is essential reading for any founder who is aiming to carve out a slice of their customers’ attention. But if you would like a more up to date and easily digestible article on the problems of information overload, read The Wall Street Journal article by Erich Schwartzel Oscar in the Age of Entertainment Overload subtitled Audiences have more choices than ever before. For Hollywood, that might not be a good thing. One could say that entertainment is just a special case of information, which I believe it is, and thus the issues this article raises are just as applicable to newspaper publishing, blogging, podcasts, or even journal publishing.

What’s the problem? It’s not with the producers, it’s with the consumers!

When researchers at Warner Bros. discovered that audiences seemed overwhelmed by too many choices, they had a guess at a diagnosis. Albert Einstein had called it “option paralysis,” indecision in the face of too many choices. (It’s why Einstein opted to wear the same sport coat and trousers every day.) For advice, the studio brought in Barry Schwartz, an emeritus professor of psychology at Swarthmore College and the author of “The Paradox of Choice.”

Perhaps you recall the song by Bruce Springsteen, how totally obsolete, 57 Channels (And Nothin’ On):

Striking a just-right balance–enough new choices to excite, but not too many to overwhelm—will be crucial to studios getting into the streaming game, said Dr. Schwartz. If studios end up spending millions of dollars producing too much new programming, he said, they could end up in a situation where “you give people everything under the sun and they end up watching what they watched before.”

According to Dr. Schwartz’s research, an influx of options also makes the ultimate choice more an expression of personal identity. When there are only five movies to choose from—for instance, at a multiplex—consumers do not put much stock in their decision, he said. But when there are 30 choices, it becomes a question of, “Am I the kind of person who would watch this kind of movie?”

“Even when you’re sitting at home and no one knows what you’re watching, the stakes go up, which just increases the paralysis because it’s now a big deal,” he said.

But the biggest culprit in the problem of option paralysis is not cable TV, not any more, it’s Netflix. And who does Netflix worry about?

But Netflix isn’t primarily worried about rival studios and cable giants. In a January letter to shareholders about its fourth-quarter earnings, Netflix wrote, “We compete with (and lose to) ‘Fortnite’ more than HBO,” referring to the popular videogame.
“There are thousands of competitors in this highly fragmented market vying to entertain consumers and low barriers to entry for those great experiences,” the letter noted. Chief Executive Reed Hastings has also cited sleep as one of the company’s many rivals for viewers’ attention and time.

Yep, videogames and sleep!
So attention every founder! The battle for consumers’ attention is not just with digital content – entertainment, news and information – it’s about everything, every new product requires a customer’s attention first before a purchase can be consummated.
And, of course, all your marketing – social media, legacy media, public relations, trade shows, billboards, you name it – is fighting for the tiniest slice of a consumer’s attention.
So please, forget about MVPs – Minimum Viable Products – and get with MRPs, Minimum Remarkable Products – and keep on doing things that cause your customers to remark about your product to friends, acquaintances, and colleagues. Only by strongly differentiating yourself from all the other choices presenting themselves incessantly to your customers can you perhaps rent, but never own, your customer’s attention just long enough to close a purchase.

One thought on “Option paralysis or the paradox of choice”